An Anniversary Gift to Remember

I know, I know, I know, enough about the new sober Grady. I promise I will stop sharing his good news soon, because later this month I have some exciting news to share with everyone. I can’t wait! Stay tuned.

About Grady, one more time:

For a man who reads but never posts on Facebook, I was curious (later shocked) when my husband kept asking me, on our anniversary day, “Have you seen Facebook today?”

The story began early that morning, when Grady asked, if I knew where the Hillcrest Magazine that featured our family was. After telling him yes, with directions on where to find it, I later saw him standing over the open magazine taking a photo and asking me how to edit it. He said he was changing his profile pic. Odd, since he never posts or shares anything, but I did not question.

By end of day, after about the 3rd or 4th time of him asking if I had seen Facebook yet, I logged on to find this heartfelt, premeditated post.

OMG! I was shocked. Who is this man? Just before giving Grady his due kiss, I said, “Who are you and what did you do with my husband?”

Even though I am a weekly blogger of many years, who writes about everything, I still do not go for, and am often embarrassed by, reading the oft-too mushy stuff online. It was only a few weeks ago that I saw such a post and almost told Grady I was glad he did not expound about our love online. But now that I have been the subject of someone’s adoration, I totally get it.

His post, a rare declaration of love (online or off), for all the world to see, was one of the best gifts I have ever received. 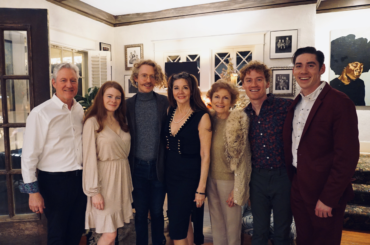