Super Bowl and Our Flags

We see our flags everywhere, around town, when we travel, in the newspaper, on TV and in the movies. This past Super Bowl Sunday we contributed to the game, you wouldn’t even know you were seeing our product if we didn’t point it out. This is a fun little thing to know about us. We make and sell the little flags that go on top of almost all the goal posts you see on TV. The following article is about Sportsfield, to whom we sell our goal post flags to. 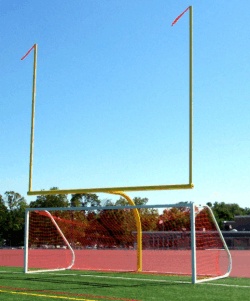 On The Bright Side: Delhi plays a part in Super Bowl
By Patricia Breakey
Delhi News Bureau

DELHI _ A group of 18 to 20 people from Sportsfield Specialties in Delhi headed for the Super Bowl are hoping that on Sunday, they’ll view not only the game, but the goal posts.

The goal posts at University of Phoenix Stadium in Glendale, Ariz., were custom-made at the Delhi plant, according to Wayne Oliver, Sportsfield Specialties Inc. president.

“We can’t wait to see our goal posts,” said Debbie Oliver, a company employee and Wayne’s wife. “It’s going to be great.” Wayne Oliver said the group would probably have gone to the Super Bowl, but “our goal posts are just another good reason to be there.”

When the ball sails across the end zone, said Michael P. Zambito, modular products business unit manager, he will be thinking to himself, “That is one nice set of goal posts.” 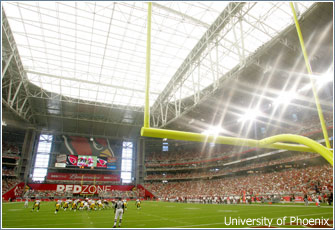 The posts are the Sportsfield Specialties’ AdjustRight model, which are the company’s largest sales volume product, Wayne Oliver said. There are hundreds of the posts installed across the country, he said, including in Delhi on the Delaware Academy and Delhi Central School football field.

“They are the most specified goals posts by far,” Oliver said. “We are the nation’s largest manufacturer of goal posts.”

He said that when the University of Phoenix Stadium was being designed, semi-custom goal posts that could be easily taken down were needed. This was to accommodate the movement of the natural grass field outside, where it could be watered and fertilized and receive natural sunlight.

He said to move the tray that the field grows in, the goal posts must be removed, replaced and uprights adjusted.

Zambito said that because the NFL’s Arizona Cardinals host many televised games, it was essential for them to have perpendicular/parallel uprights on the goal post with the ability to quickly and easily adjust them.

Oliver said that when the posts are being constructed, “almost everyone in the factory works on them, so that makes this a neat small-town story that Delhi has a part in the Super Bowl.”

During the construction process, the post had to be painted the distinctive florescent National Football League yellow, Oliver said.