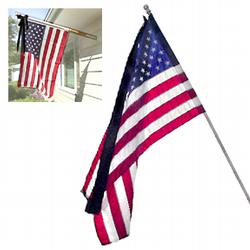 For flags that can’t be lowered, such as those on many homes, the American Legion says attaching a black ribbon or streamer to the top of the flag is an acceptable alternative. The ribbon should be the same width as a stripe on the flag and the same length as the flag.

For a wall-mounted flag, three black mourning bows should be attached to the top edge of the flag, one at each corner and one in the center.

Works well with a Mourning pulldown flag which has a widely known meaning.