The power of media to ignite the masses always amazes me.  All of this attention focused on the Confederate flag has had a reverse reaction. Rather than stopping sales, demand has skyrocketed. I have probably sold more Confederate flags in the last week than I have in the last 40 years.

Many of the buyers are not from the South and don’t even care about the flag itself. They’re just caught up on the idea that it might become obsolete, so they’re buying one to put in the closet, only to be discovered 30 years from now by their grandchildren.  As Carl Jung said, “What you resist, persists.”

The murderer that started this debate was holding a gun and brandishing the Confederate battle flag.  Aren’t we focusing on the wrong thing in this picture?  The flag did not kill anyone. Do I wish the white supremacist hadn’t adopted the confederate battle flag?  Yes, because then I could still pretend to be a teenaged rebel.  Do I wish the Tea Party hadn’t adopted the “Don’t Tread on Me” Gadsden flag?  Yes, because then I could still fly it for fun without looking like I was supporting a cause.

But all of the above has happened.   Pick another Confederate flag to show your heritage.  Check out the Bonnie Blue, the Republic of West Florida flag that once served as a Confederate banner.  In Margaret Mitchell’s book, Gone with the Wind, Rhett Butler named his daughter Bonnie after the flag. It is a lovely flag, and maybe it’s time it got its due.

We don’t want to forget history.  It is through our remembrance of history that we ensure we don’t repeat the same mistakes.  More soldiers died during the Civil War than during the Vietnam War. To learn about the black soldiers who fought with the Confederacy, visit my sister building down the street, the Mosaic Templar Cultural Center at 9th and Broadway in Little Rock, Arkansas. 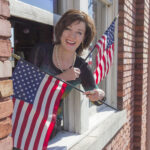 Kerry McCoy is founder and president of FlagandBanner.comand publisher of Brave Magazine. Kerry has been in the flag business for more than 40 years. If you would like Kerry for an interview or to speak at your event, please contact marketing@flagandbanner.com with details.