Where were you Inauguration Day?

Where were you during Barack Obama’s swearing in ceremony on January 20, 2009? I will never forget where I was. Grady and I attended the Inaugural Day Party at the home of our friend Kaki Hockersmith. And not just any party but the best planned Inaugural party I have ever participated. Kaki reenacted the events or the Inauguration! She left nothing out! Knowing her, she probably had more fun planning the event than attending it. >wink< 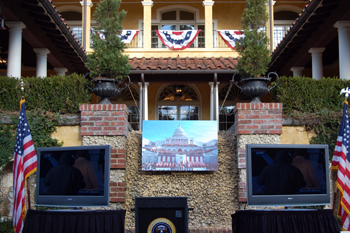 The guests sat outside in front of a podium and (2) flat screen TV’s, as if we were sitting at the real inauguration (and it was just as cold). Our very own Arkansas’s Attorney General Dustin McDaniel began the ceremonies with a sobering comment about the importance of this historical day. Together we all watched Barack’s speech and hung on his every word. We wept tears of joy as Lawrence hamilton, from the balcony above, sang our National Anthem. 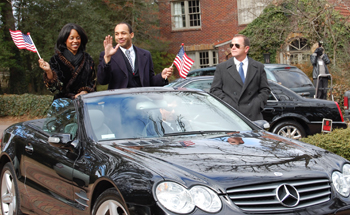 After the momentous event, we were ushered to the front lawn for the Inaugural parade. To all of our joy, down the neighborhood street in a sharp Mercedes convertible guarded by secret service agents came the man and woman of the day, Barack and Michelle. Tagging along behind Barack and Michelle was, Bill Clinton (thumbs up), Dick Cheney (in a wheel chair holding a shotgun), George Bush (without Barbara), John and Cindy McCain, and last but not least, Sarah Palin with a baby. 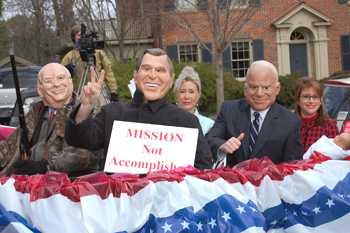 It began with coffee and muffins and ended with Bloody Marys, Caesar salad and chicken pasta. It had seriousness, humor, warm company, and cool weather, mixed all into one. I know I had a fun filled day. The party lasted 4 hours, but the spirit lasted much longer.

One of my employees, Tim Williams, got to see the real Inauguration in Washington D.C. If you would like to view those pictures on the Arkansas Democrat website go to this link: http://focus.arkansasonline.com/galleries/320538/