My business mentor, Charles Fisher, was a prankster aficionado. He did things like poke a tiny pin hole in the side of your soda can, just below the tab opening, so that every time you took a sip it would dribble down your chin. For all new employees, he would leave a pink return call slip on their desk with the phone number to a funeral home asking them to return a call to “Myra Maines.” He always had a joke ready for any occasion. If your pants were too tight, he would say, “Those pants are like a cheap hotel … no ballroom.” When asked if he was bringing his wife (whom he adored) to a party, he would say, “You don’t bring a sandwich to a banquet.” Needless to say, April Fool’s Day was his favorite day of the year.

Since his retirement and now passing (rest in peace, my friend), there has been no one to live up to his antics, until last week.

After the live radio show interview with Mr. David Soos of Soos Stained Glass, my sons and I went out to dinner. Once seated at the table, son Gray entertained us with a work story.

Earlier in the day, a customer emailed him, claiming to have been recently diagnosed with terminal testicular cancer. He wanted to buy his wife a memorial to remember him by and because of his type of cancer he wanted it to be … a bas relief of his penis.

Prior to this email, the same customer had supposedly called our salesman Curtis and asked if our company, Our Corner Market, would be willing to fill such a request. Curtis relayed this unusual ask to Our Corner Market’s manager, son Gray, and let him know that an email from BigOleBob@aol.com would be forthcoming. After all the snickering was out of the way, Gray found it easy to be both sympathetic and polite, promising the customer, Bob Clausen, he would check on availability.

Before instructing the customer to send in artwork, a .jpeg of the man’s penis, Gray asked around the office for advice. “Is this an acceptable request?” Some, (mostly girls) said. “Absolutely Not! Men are so proud of their penises. Why would his wife want a picture of that?” And, others (mostly men) were like, “Why not?” When it came to asking me, I, of course, being a businesswoman said, “Sure, just get your money upfront.” Gray decided to let the vendor make the final decision and sent in the request.

To Make or Not to Make

I must tell you that the question “To Make or Not to Make” comes up a lot in the custom flag – and now plaque – business. We frequently get custom flag requests that are questionable. When possible, I continue to stand behind my policy: that we are not in the business of censorship. There are exceptions, though. When a customer recently requested a flag that read “F*ck My Neighbor” I had my guys politely decline. I am sure the customer’s wife was silently thanking me.

That night as we dined, we made penis jokes and questioned ourselves about the morality of fulfilling our dying customer’s request. The next day the vendor made the final decision and declined the job by saying, “We think we’ll have to pass on this one.”

Slowly the clues began to trickle in. This was someone that knew Gray. The prankster, who was so proud of his prank’s success, could no longer contain his gloating. Salesman Curtis who, in the beginning, feigned the first call from the customer, began to blow his cover. He wanted his due and rightly earned respect for such a well executed practical joke.

Once Curtis’ identity was revealed, he began telling us about creating the email and how Gmail charges, but AOL’s are free, and how he chose the name, Bob Clausen, from our local NBC station newsman, (we should have caught that).

All this well-thought-out dedication to clever pranking brought on riotous laughter and fond memories of Mr. Charles Fisher. It also elevated Curtis in company folk lore, and got us ready for April Fool’s Day, which is just around the corner.

Playing to an Empty Audience 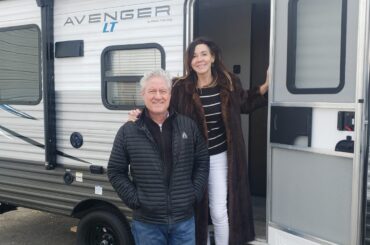 RVing is Not for the Faint of Heart

Have you heard the phrase “Uncanny Valley?”

How Valentine’s Day Became an Exercise in Appreciation