Every now and then, even a blind squirrel finds a nut, or so the saying goes. I am thrilled to let you know that The Friends of Dreamland found the biggest nut ever! Monday, March 12, 2018 will be a day to remember forever. My son Matt came running down the hall to my office with his phone in hand. Wide eyed, he extended it towards me. Then he pulled it back to himself frantically typing on the screen in an effort to produce a voice mail. I noticed his hands were trembling and thought, “What the heck is wrong with him?”

Suddenly, his efforts succeeded and his phone announces over the speaker, “This is the National Park Service…” and I knew before they finished the sentence we had been awarded the African American Civil Rights Grant of $499,668.00 for renovations and an elevator to make Dreamland Ballroom ADA accessible.

Matt and I jumped into each other’s arms and emotions ran amok as we vacillated between laughing and crying. Word spread around Arkansas Flag and Banner like a wild fire. Reactions to the news varied. Some cheered with joy while others were struck dumb. My more cautious employees thought it was a prank phone call, but my favorite reaction was when someone said they believed it to be a gift from my recently deceased mother.

This will be a year that my son Matt never forgets. Two weeks ago he was given a promotion at work, last week his November 2017 grant application for nearly ½ a million dollars was awarded and this week he marries his girlfriend of 5 years. March 2018 is a big month for little Mattie, who is not so little anymore.

Special thanks to Congressman French Hill and his staff for all their help in making this dream come true. 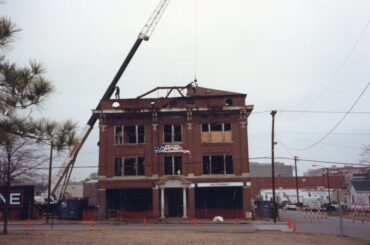