After a long primary season and a relatively anticlimactic general election, it feels as if we have a chance at being One America again. Regardless of who you voted for, Barack Obama defied the odds and one cannot help but feel the optimism that is in the air today. While those dancing in the streets of other countries may not help us deal with the financial crisis we now face, it’s at least good to know that the rest of the world has renewed faith in the American Dream.

And this was not lost on John McCain. He is a class act. In one of his most eloquent speeches, he recognized this moment for its historical significance and urged everyone to unite under President-elect Obama.

I can proudly say FlagandBanner.com was part of the process by providing flags to both campaigns. The McCain campaign used our flags in Florida and those seen on stage as Barack made his acceptance speech, were all provided by yours truly, Arkansas Flag and Banner. 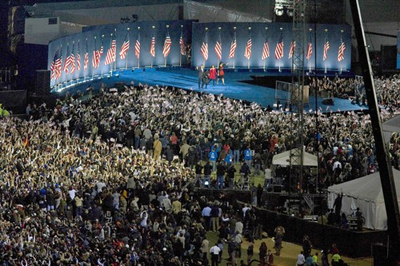 But I have to say, after such a long election, I am definitely ready to move on. Whew!